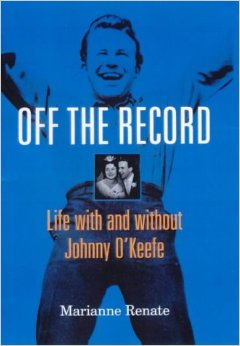 Off The Record: Life With And Without Johnny O'Keefe

Format: Book (Used)
Cat No: Marianne Renate
Label: Macmillan Details "Off The Record" is an enthralling journey through rock'n'roll Sydney in the '50s and '60s. This is the first indepth look at the man who almost single-handedly established Australia's rock'n'roll industry, and the musical phenomenon that was Johnny O'Keefe. But first and foremost this is Marianne's story, a memoir of uncompromising honesty documenting her stormy and passionate marriage to Johnny and her struggle to protect and support her three children through the tough times. Backstage of the glitz and excitement of the famous 'Six O'Clock Rock' and legends like Sammy David Jr, Bill Haley and Bobby Darinwas a marriage turned sour by Johnny's mental instability, drugs and depression.

Book is in great condition